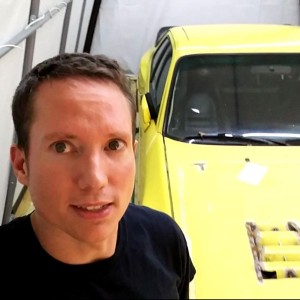 I had always been a fan of the Porsche 944 turbo, but when I came across one that had been severely neglected and was in desperate need of long overdue TLC (it was also being advertised for only $5000 CAD) I knew I had to take on the challenge. This particular Porsche 944 Turbo had received a couple of less than desirable paint jobs over the years, some very interesting design/color choices and seriously questionable modifications. It was clear that it needed a lot of work, but I was determined to bring it back to its former glory. After being told the only major thing mechanically wrong with the 944 Turbo was a potentially bad fuel pump, I decided to make an offer. I learned a lot of lessons that day. Not only was the fuel pump bad but nearly everything else was as well.

Porsche 944 Turbo – A Diamond in the Rough

As I began the restoration process, I quickly realized how underrated the Porsche 944 turbo really is. Despite its reputation for being a less popular model, I found that it had a devoted fan base, excellent aftermarket support and was actually becoming more popular in recent years. In fact, I had heard of several examples that had sold for upwards of $80,000 USD and even one for $135,944 USD on BaT, which only served to fuel my passion for bringing this particular car back to life.

One of the most exciting developments during the restoration process was when I learned that even Jerry Seinfeld, who is a large Porsche collector, had jumped on the Porsche 944 bandwagon. In early 2019, the comedian and car enthusiast purchased a 1989 Porsche 944 Turbo, further proving that this model was on the rise in popularity.

A lot of progress has been made on the Porsche 944 Turbo in the five years I’ve owned it. From discovering that the fuel pump was seized to replacing the entire engine due to a bad rebuild, there was hardly anything that I didn’t have to fix or replace. When I first saw the car in person, I noticed bondo cracking in the paint job, poorly built hood vents that caused the hood to collide with components in the engine bay, royal blue powder-coated factory clubsport wheels (why?), a cracked windshield, and rags shoved behind the driver’s side a-pillar where a two-gauge pod that housed a boost gauge and an oil pressure gauge was installed. The rag was there to catch the leaking oil from the poorly installed oil pressure gauge.

Breakdown of the problems I discovered with the Porsche 944 turbo:

Summarized list of what’s been fixed or replaced followed up with pictures and videos.

Some good components that came with the Porsche 944 Turbo that needed little to no attention (the list is wildly short):

Still to do to the Porsche 944 Turbo

Some Before and Afters

As I progress through the final stages of the Porsche 944 turbo restoration, I couldn’t help but feel a sense of pride knowing that I had saved one of these underrated yet highly coveted cars. There’s lots more to come, stay tuned and follow on YouTube.

I had always been a fan of the Porsche 944 turbo, but when I came across one that had been neglected and was in desperate need of some TLC, I knew I had to take on the challenge.

If you’re building a track car or are just looking to shed some weight on your Porsche 944 to improve your power to weight ratio here is a list that should help you decide where to focus most of your energy.